Create an Account - Increase your productivity, customize your experience, and engage in information you care about.

On February 5, 2019, the Village approved a new North Lincoln Tax Increment Financing (TIF) District, to support the development of the proposed District 1860 mixed-use development on 8.25 acres at the northwest corner of Lincoln and Touhy Avenues, the site of the former Purple Hotel. This approval came after months of work between the developer, Chicago-based Tucker Development, and the Mayor and Village Board. The support and assistance of countless community members, through reviews by the Economic Development Commission, Plan Commission, TIF Joint Review Board which included members of local taxing bodies, including School Districts 74 and 219, the Lincolnwood Library District, as well as Cook County, Niles Township and Oakton Community College and the involvement of Village residents, was invaluable. At that same meeting, the Village approved a Redevelopment Agreement with Tucker Development, which detailed the concept plan for the area, as well as the developer and Village responsibilities as the project moves forward. The Village also approved an Intergovernmental Agreement with Lincolnwood School District 74 and Niles Township High School District 219 to ensure that their costs to educate any students moving into the development from outside the Village will be covered by the revenue generated in the TIF District.

The District 1860 project consists of approximately 80-85,000 square feet of commercial space, restaurants, retail, and service uses, anchored by a 38,015 square foot Amazon Fresh grocery store, and 299 luxury residential apartments. Tucker Development worked in partnership with the Village over much of 2019, to achieve final zoning approvals, in the form of a Final Planned Unit Development (PUD) by the Village Board, for Phase I of the development, including all facets of the project, with the exception of the hotel, on November 19, 2019. The hotel developer, Rosemont, IL. based. First Hospitality Group, obtained its final zoning approvals, for Phase II of the PUD, on February 18, 2020, but has since withdrawn from the development. At that same meeting in February, Richard Tucker, CEO of Tucker Development announced he had signed two restaurant tenants to the development: Fatpour Tap Works 8,000 square foot restaurant and craft beer and or cocktails bar and Fat Rosie's, 5,100 square foot taco and tequila bar from the Francesca's Restaurant Group, with restaurant concepts throughout Chicagoland. 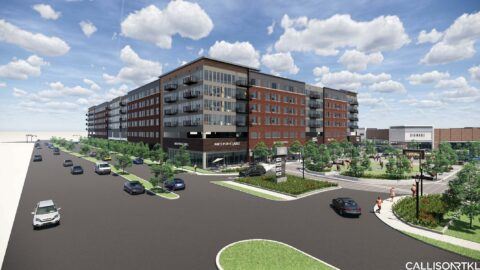 On July 20, 2021, the Village Board approved an Amendment to the PUD to accommodate the larger footprint of Amazon Fresh with rooftop parking and a second amendment to the Redevelopment Agreement adjusting the financing structure as a result of the hotel development not moving forward.

In the spring of 2020, the Village also completed a process of vetting the financial consultants who will serve on the Village's team, as the Village prepared to issue TIF Notes to assist in the financing of this $150-175 Million development. TIF Notes are a financial instrument, in which property and sales tax revenues generated in the North Lincoln TIF District itself are utilized to pay off the Notes. The Village is not pledging any revenues from the General Fund, which is used for the operating costs of the Village, and there will be no commitment from the Village to repay the Notes, nor a requirement by the Village to back the revenues. The Village also approved a sales tax sharing incentive agreement with Tucker Development, at the September 15, 2020, Village Board meeting, to incentivize the signing of a 35,400 square foot grocery store.

On June 16, 2020, the Village approved the hiring of a Bond Counsel and an Underwriter for the project. The fees for these two consultants are also paid by the TIF revenues generated in the North Lincoln TIF District, with no cost to the Village's General Fund. The role of the Bond Counsel is to provide guidance and an opinion regarding the proposed financing through TIF Notes, ensuring that the Village is following a complicated series of applicable State and Federal laws. The Underwriter assists the Village in the actual sale of the TIF Notes, which are sold to investors, providing the up-front funds for financing. The investors are then paid back through property and sales tax revenues generated in the North Lincoln TIF District.

On November 10, 2021, the Village closed on the financing and construction transactions for the District 1860 Redevelopment Project. As part of the closing, the Village’s TIF Notes were issued and the first construction draw was approved. Additionally, the Village received funds totaling $1,592,472.24 which represents the building permit fees, the demolition permit fees and reimbursement for legal fees and engineering services. The Village will retain control over the Project Funds and approve disbursements as needed.

Throughout 2020 and 2021, Tucker Development and the Village continued to push forward, moving the project closer to construction. Tucker Development submitted construction plans in March 2020, for the mixed-use building, containing luxury apartments and over 40,000 square feet of ground-floor commercial space in Phase I of the development. Revised plans for the mixed-use building and initial plans for the grocer building were submitted in the spring of 2021. Building and demolition permits were issued for the project as part of the TIF Note closing.

Power Construction, general contractor, has begun the demolition of the remaining Purple Hotel foundations. The first two buildings of the project are anticipated to be completed and opened approximately eighteen months after construction begins, with the development of the "hotel parcel" to follow once an end-user is identified.